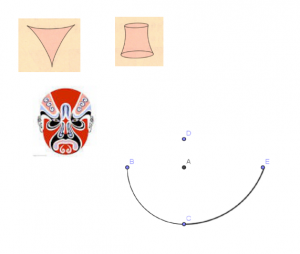 For the symmetric figures, what are the lines of symmetry (if applicable)?
In a symmetric figure, we can produce as many isosceles as we like. Do you know the easiest way to find them?

We need to explain on the last figure (the figure at the bottom right). It is consisted of two circular arcs with different radii. The two arcs are glued smoothly (at the gluing point). This last figure is not symmetric.

Not only this figure is NOT symmetric, but also we CANNOT pick out from it a sub-figure that is symmetric, as long as the figure contains both arcs with different radii. But can you argue for this claim?