Let’s look at a few problems on solving equations of different forms.

Find the smaller root for the following.

Relating to equations above, we plot several curves using Geogebra (an app which can produce the graph for given functions – of course, this is only one feature of the many).

What’s interesting is all the three equations as in (a)(b)(c) share a common solution, and it can be found through algebraic manipulation. Take a forward look (click) here – you will see amazing graphs; the solution (roots) shall be some intersection points.

Of these questions, the challenging levels are in the order of ascending: from average level like (a), to somewhat challenging like (b), to very challenging in (c). For better understanding, we suggest the reader to try solve questions (a) (b) (c) first; and then compare with the solution provided in this file (pdf),
where we solve algebraically only for (a), but applying a combination of algebraic and graphic solution to tackle problems (b) and (c).  It’s called smart solution — we are applying a variety of tools at hand, not just following a fixed procedure.

Combining graphing with algebra facilitate us to guess where the root(s) of the equation are, or (sometimes) make observation of the roots easier. It’s also fun!

Try work out these equations first, then you can check out the solutions (pdf) here.

Now you can take a second look at the graphic solution. Have you seen and understood more, about the question, and about the how algebraic manipulation plays out in function graphs?

Talking about shapes, one of the most familiar is the parallelogram. And about it we have a problem as follows.

Given quadrilateral ABCD, E, F is the midpoint of AD, resp. DC. Lines BE and AF intersect at point G. (And the figure is as below.)

How can the division ratio GE : GA : GF : GB as given, be used as the hints to deduct the parallelogram?

Well, to put the known condition in proper perspective is important. If first attention is directed to GA : GF = 2 : 3, you might wonder how that can be utilized. Suppose you notice that GE : GA = GA : GB = 1 : 2 : 3 : 4, and suppose AF and BE are perpendicular to each other, then we conclude that the two triangles EGA and AGB are similar right triangles .. But how that can be used to help recognize a parallelogram?

(Why doing that? If BE = DJ were proved, then JDEB would be a parallelogram. Parallelogram JDEB implies that AD // BC. Can you see that? Just note ED // BJ, and  segment ED is on line AD, resp. BJ is on BC; so we have, finally, AD // BC). So we’ve proved that AD and BC, as one pair of the opposite sides of a quadrilateral, is parallel. We can analogously attempt for AB // CD. Now by definition, ABCD is a parallelogram.

A rather interesting way (of course challenging but a pleasant experience), isn’t it? For anyone who wants to do more systematically, or automatically, is there another way?

Yes, there is. That way is to use coordinate system.

Since AC and BD bisect each other, ABCD is a parallelogram. But what if the AB and BE are not perpendicular? Well ABCD is still a parallelogram in case – but explanation is needed – for which we can pursue later. It deserves to point out, by changing the x- and y- axis from being orthogonal to arbitrary, whether the shape is parallelogram or not will have the same answer.

Continuing from the problem discussed above, suppose that apart from AE, BF, we draw CJ and DK, where J is midpoint of AB and K is the midpoint of BC. Here is your turn to take a ramp-up challenge:
(If you truly understand what’s going on in the above discussion, then it’s just a piece of cake!)

(ii) What type of parallelogram is the one mentioned in question (i)? Is it a rectangle or rhombus? 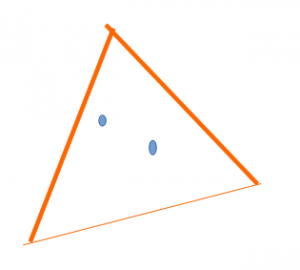 (English version is being prepared and corrected – to be posted soon)

For each positive integer n, the Murray number of n is the smallest positive integer M, with M >n, for which there exists one or more distinct integers greater than n and less than or equal to M whose product times n is a perfect square.